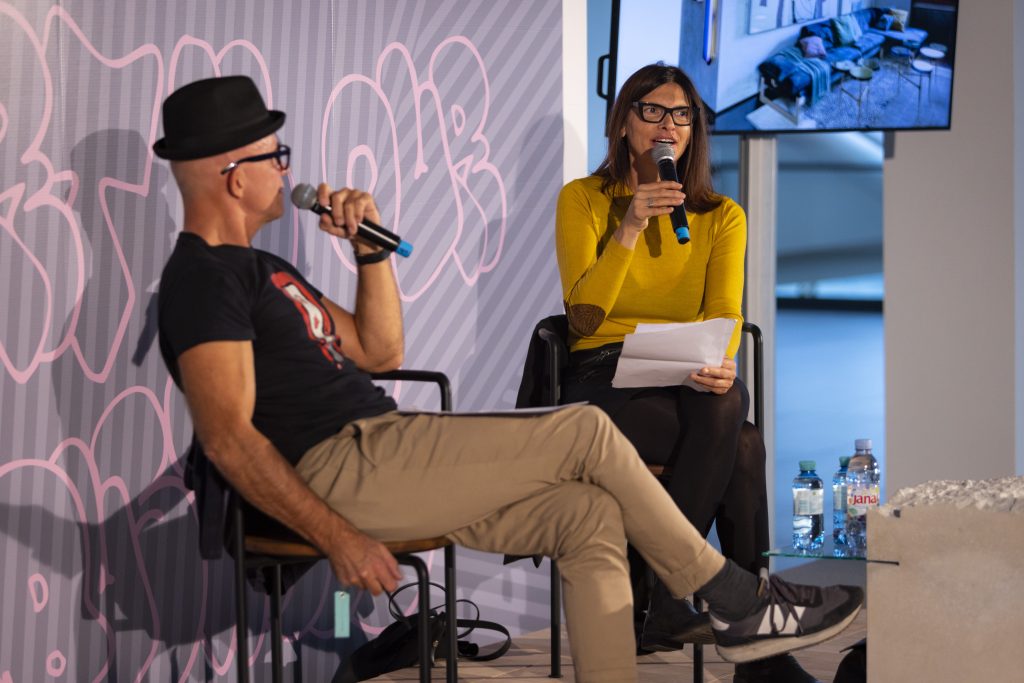 The Hungarian Fashion & Design Agency organised the 360 Design Budapest exhibition for the third time in October. Similarly, to previous years, those interested could hear presentations by internationally acknowledged professionals, expanding their knowledge about the world of art and design. The designer duo, Draga Obradovic and Aurel K. Basedow, also took part in the event and told their stories in a keynote speech to the audience of 360 Design Budapest.

360 Design Budapest opened its gates for the third time this year. Visitors could view over 100 ground-breaking design objects by more than 40 designers at the exhibition and event series held in the building of Bálna Budapest. Besides, those interested could hear useful and exciting stories thanks to the exclusive guided tours, presentations by star designers, and roundtable discussions.

Those participating in the Inside Art & Design event could learn more about the work of Draga Obradovic and Aurel K. Basedow in a keynote speech. Draga & Aurel is a multidisciplinary art, design, and interior design studio founded by the two. In their operation, they gain experiences and inspiration from many artistic branches, such as the areas of handicrafts connected to fashion and design, and, alongside their individual design projects, they worked with different large companies on the international level as well.

At the duo’s evening, it turned out how their story started, what the elements of their creative processes are, what their workshops are about, and how they integrated recycling into the design process of their products from the very beginning. The work of Draga & Aurel is recognisable for its unique reutilisation of vintage design pieces; in addition, they believe, the secret to their success from the beginning lay in the fact that they only work on projects close to their hearts. Already 15 years ago, they put the basic principle of sustainability and transparency in their activity’s focus; for instance, they looked for inspiring used furniture in flea markets. The duo told the audience in detail about the workshops they hold in their own warehouse for artists interested in the restoration of old pieces, transferring their knowledge and experience.

Numerous global brands took notice of the activity and creativity of Draga & Aurel thanks to their 2009 Milan Design Week debut. They presented their Transparency Matters collection at the event to a broad audience which aroused interest in renowned galleries such as Rossana Orlandi or the Nilufar Gallery; moreover, they started collaborating with interior design brands such as Baxter or Wall&Deco.

During the keynote speech by Draga Obradovic and Aurel K. Basedow, the listeners could get to know a real success story, and the closing questions mainly addressed their future plans. The duo said they mostly focus on the present and they are motivated by the enormous amount of positive feedback coming from the audience. They also told us that they are busy preparing for an event in the near future since they were invited to Design Miami 2022.

If you are interested in one of the designer duo’s favourite materials and how they work by the picturesque Lake Como, listen to their presentation on the HFDA’s Spotify channel!